Reducing preventable 30-day hospital readmissions and RTAs is a top national priority. Reasons are multifold, but include:

Skilled Nursing Facilities (SNFs) are one of the most significant points of initiation for 30-day hospital readmissions and Return to Acute care settings (RTAs), where 25% of patients nationwide are readmitted within 30 days.

While SNFs by definition provide care for patients who are comparatively sicker or require more physical assistance and rehabilitation than those discharged straight to home, this alone does not explain SNFs’ readmission rates. In order to fix the problems associated with SNF readmissions, it is important to examine the reasons those readmissions occur. Frequently, they are associated with lower staffing rates, lower access to physician advice, inadequate communication between SNFs and the hospitals that discharge patients to them, and a variety of other factors.

In a recent study examining SNF readmission rates using the IMPACT model of Quality Improvement, staff at participating SNFs conducted root-cause analyses (RCA) of each readmission to determine medical causes, preventability, and any organizational issues exacerbated the need to ride turn to acute.

In 60.9% of readmission cases, no laboratory or test results were reported or none were conducted. Where results were reported, the highest percentage of these were abnormal pulse oximetry readings, which occurred in 16.3% of RTA patients. (Full table at bottom of paper).

When asked to examine each readmission, staff members at the various SNFs were asked the following question: “In retrospect, does your team think this transfer might have been prevented?” Their answers were surprising:

This speaks to broader themes in geriatric care and the SNF setting nationwide. Problems associated with readmissions include limited training and protocols for responding to changes in patients’ conditions, inadequate communication between hospitals and SNFs during transfers of care, and most significantly, SNF staff not having adequate access to physicians.

Telemedicine in the SNF setting

The most successful care model uses telehospitalists, who have the training and experience to determine the difference between a situation that needs ongoing monitoring and treating in place in the SNF setting versus a true medical emergency requiring RTA. Offering SNF staff support during evening and weekend hours when in-house providers are not available, telemedicine allows real-time, video examination, consultation, and supervised monitoring of potential rises in acuity.

Telehospitalists also have the ability to order any tests that a facility is capable of providing, and have ongoing communication with staff when managing a patient’s condition. Given their hospital experience, they also know what techniques can be used safely given each facility’s capabilities. Even when an RTA cannot be avoided, telehospitalist physicians can communicate with Emergency Departments and hospitals directly and clearly, reducing numbers of cases requiring full readmission, helping patients receive needed services more quickly, and avoiding lost information during care transfer. This translates to more patients being able to remain in at the SNF setting while receiving appropriate treatment for a change in acuity, and more patients returning quickly to a SNF setting instead of requiring readmission for monitoring.

Notes from the Emerging Field

To understand how telehospitalist support can be so effective at avoiding unnecessary hospital admissions, it’s helpful to consider some clinical cases stemming from a telemedicine partnership with Skilled Nursing Facility in Ohio.

In the eight months between August 2017 and April 2018, the nursing staff at the SNF made 452 total calls to telehospitalists at TeleHealth Solution, a Charlotte, NC based telemedicine company. During these phone calls, nursing staff and the telehospitalist speak over the phone for a consultation, discussing symptoms, lab and test results, and other details of the patient’s history and case. If needed, the physician elevates the phone call to a more intensive, real-time video examination, which includes EKGs, physicianguided physical exam, or other monitoring. This elevation in care was required in 39 total cases. Each of these would have resulted in a likely emergent admission without the intervention of the telehospitalist team. Instead, in 32 cases, the partnership allowed patients to be managed on-site and avoided the risks and costs associated with transferring care.

2 Numbers may add up to more than 100% as multiple causes could be checked.

Here are some examples of cases where admission was avoided:

A patient was experiencing respiratory failure exacerbated by COPD. Facility staff reached out to the telehospitals because the patient’s saturation levels were down to 82%. The telehospitalists were able to work with staff to titrate oxygen levels, add additional medications to manage the respiratory failure, and to keep the patient comfortable until the family could arrive at bedside. Despite the patient reaching 5 liters of oxygen with only a saturation rate of 90%, the telehospitalists were able to avoid admission by consulting with staff and the family, providing hospice orders, and allowing the patient to remain comfortably in the SNF setting.

Memory care unit nursing staff called telehospitalists after a patient ingested a large quantity of her roommate’s medications that were spilled in their room. These were a combination of anti-psychotics, mood stabilizers, benzodiazepenes and anti-epileptic drugs, and interacted with the patient’s own medications. Rather than requiring emergency treatment, working with the telehospitalist allowed appropriate management on-site.

The doctor spoke with poison control and confirmed that the majority of the ingested medications had risks of cardiac side effects and interactions. He ran an EKG and evaluated all her cardiac intervals. Working with staff, the physician administered a significant amount of IV fluids, checked labs and routinely checked the patient’s EKG to ensure there were no adverse side effects. The patient returned to her baseline with no long term sequelae. Without this coverage, the patient would have required immediate hospital admission for observation.

Nursing staff called telehospitalist to evaluate a patient with hypotension and pure blood coming from foley catheter. Staff had removed the foley before speaking with the physician. The patient complained of being tired but had no specific complaints, and stated he was not pulling at the foley. The patient had hypotension (88/42), and acute hematuria confirmed by labs.

The telehospitalist ordered a 1L bolus of IV fluids, a stat CBC, and saw quick improvement in the bleeding and the hypotension. Since the Foley was already pulled, the doctor instructed nursing to obtain a bladder scan in one hour and monitor closely for urine output, seek out a urology appointment for the patient in the morning, and added an extra dose of Flomax in case of obstructive uropathy.

Although the patient requested ER evaluation due to feeling weak, the telehospitalist suspected he had acute blood loss anemia. The doctor communicated with the ER to discuss the ongoing patient care and goals. The ER physician was able to reinsert a catheter. Bladder irrigation showed clearing of the urine with a stable hemoglobin. The telehospitalist then worked with the ER for transfer back to the facility for continued care and the requisite urology consult. Without that telehospitalist support, the patient would have had to be admitted for monitoring and further intervention.

In the 32 cases where hospital admission was avoided, average costs would estimate that the partnership saved $76,704 in lost revenue, not including PAMA Penalties, reduced star ratings, and credibility among referring hospitals.

When Admission is Necessary: Telehospitalist-Verified Need for RTA

Although SNFs adapting to new CMS policies are certainly aiming for reduced admissions and RTAs, the entire SNF community and the mandate of care reforms maintain a shared goal of providing top-quality patient care. Therefore, it is critical to examine not only the cases where a potentially costly, traumatic, and risky unnecessary admission can be avoided, but also cases where patients have an escalation in acuity that absolutely requires treatment in an acute care setting.

Without adequate physician support, nursing staff who are aware of the problems associated with transfers of care and attempts at facilities to reduce readmissions run into a bind. They do not want readmission, but their primary commitment has to be to the patients, and they do not have the training to judge a patient’s acuity on their own.

Although the above clinical encounters demonstrate situations where admissions were avoided, telehospitalist partnerships are useful in helping staff have confidence that they are providing the treatment a patient needs while also working on readmission-related quality improvement. In order for these partnerships to be effective, both telehospitalists and staff have to feel comfortable implementing a RTA when necessary, and nursing staff should not have to fear blowback over such decisions.

IN THE SEVEN CASES IN THIS PARTNERSHIP WHERE HOSPITAL ADMISSION OCCURRED, CIRCUMSTANCES WERE AS FOLLOWS:

In all of these cases, an on-site physician would have been extremely unlikely to avoid an admission, given the facility’s available equipment and the level of care provided. Nursing staff working alone or with an offsite but local on-call physician could certainly not have avoided readmission because of the time it would require for an on-site physician to arrive.

In fact, although telehospitalists provided coverage during evenings, nights, weekends and holidays, making them the physicians responsible for patient outcomes during more than half of each week, the cases they managed accounted for only 5.9% of the 117 hospital inpatient admissions from this SNF during the study period.

3. Method of calculation is average Length of Stay (5.1 days) multiplied by Medicare reimbursement ($470/day) multiplied by number of admissions avoided.

If Skilled Nursing Facilities are to follow the standard quality improvement mandate of providing better care for every patient every day while lowering costs, they must be able to provide the services and expertise needed to manage their patients’ changes in acuity without resorting to unnecessary admissions. Yet nationally, they have not proven ability to do so, usually through no fault of their own. Although nursing staff have amazing capabilities and knowledge bases and should be providing services at the top of their licenses, the medical and payer community needs to recognize that it cannot expect those staff members to make decisions about acuity beyond their training. In order for treating-in-place to become the standard of care, with reduced risks and improved patient outcomes, SNFs require physician support at all hours. With today’s technology, however, that support does not have to include in-person and on-site physician staffing.

Telemedicine offers physician availability to nursing staff and immediate access to evaluation if required. This increases the chances for each SNF resident to get the care they deserve in the appropriate setting, avoiding the risks and costs of unnecessary hospitalization while escalating care when needed. As the data from this partnership demonstrates, nursing staff working together with acute care experts like hospitalists through telemedicine can make excellent decisions about the necessity of RTAs. When they do, the result is improved patient experiences and outcomes, lowered risks, and lowered costs. 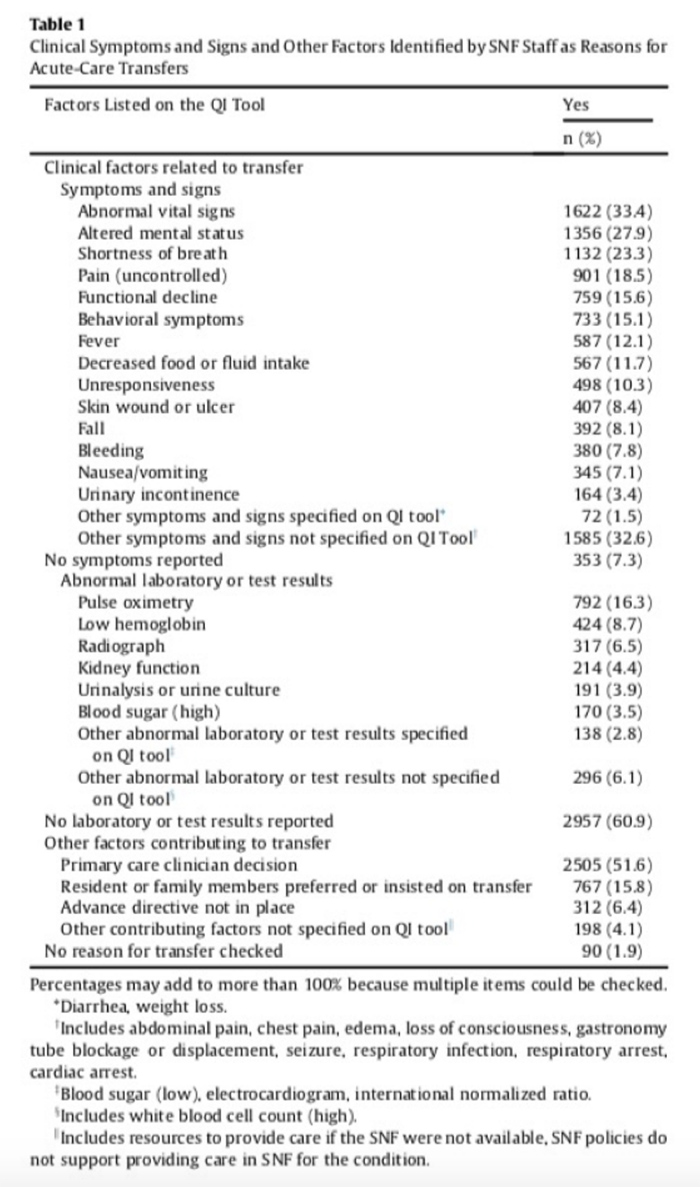